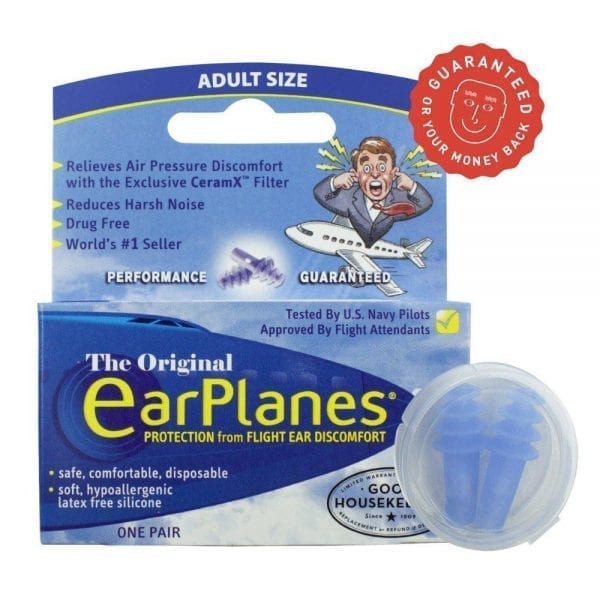 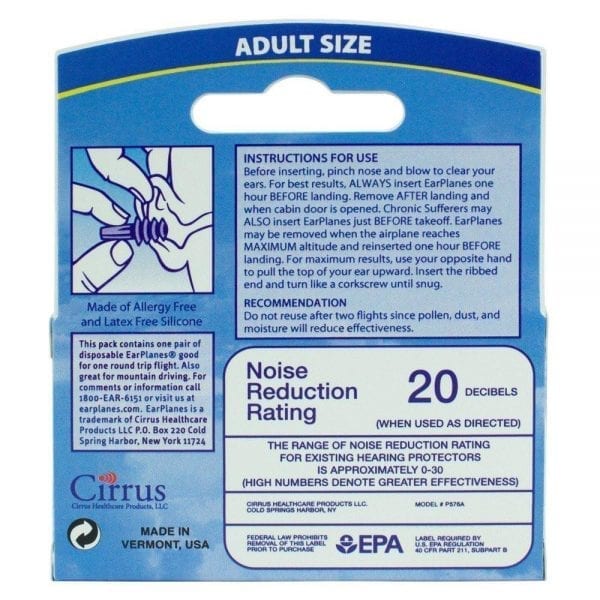 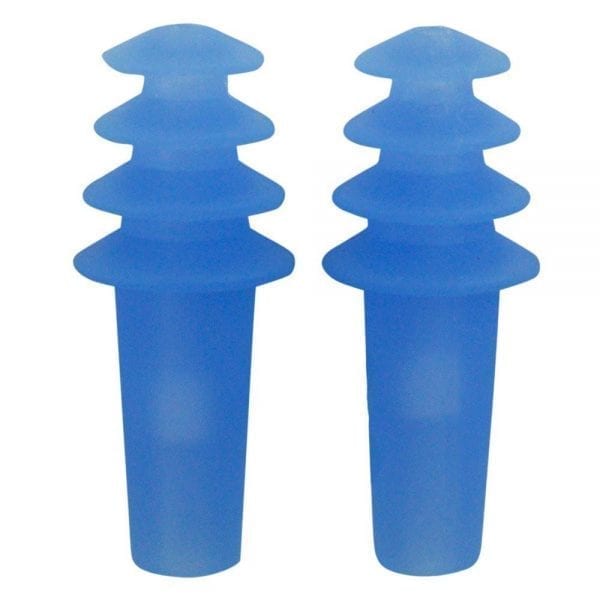 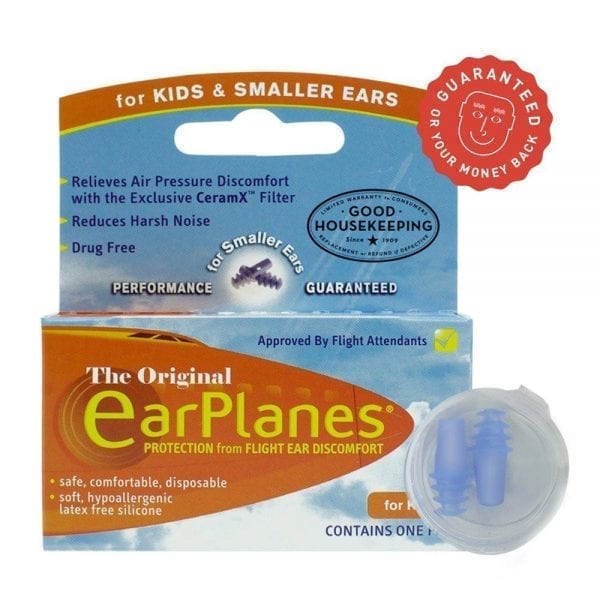 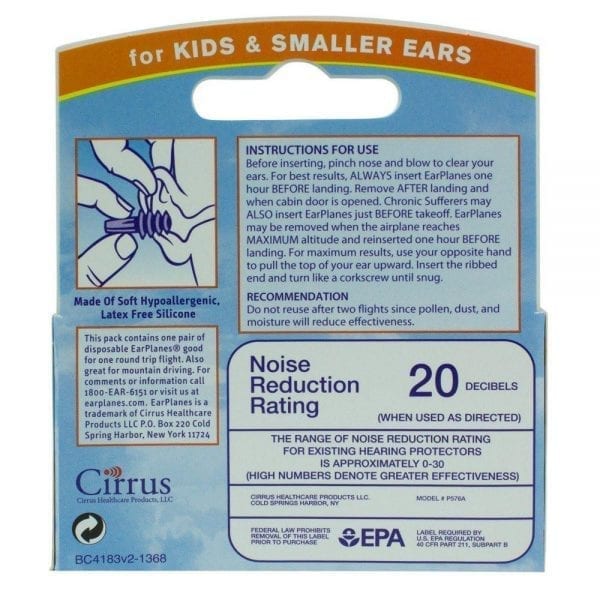 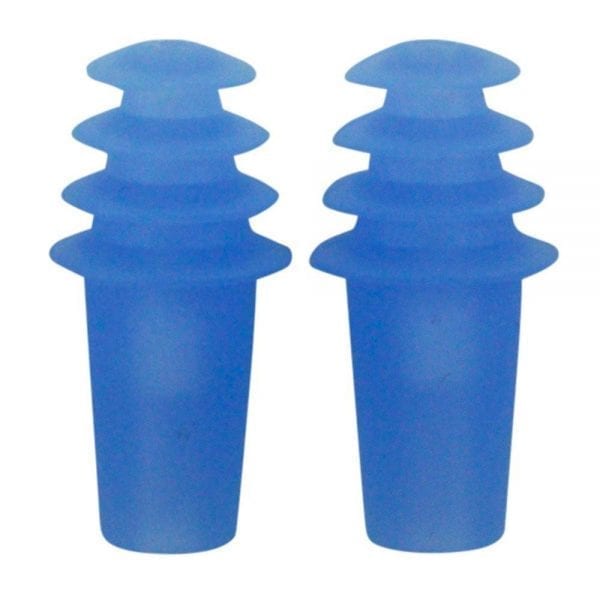 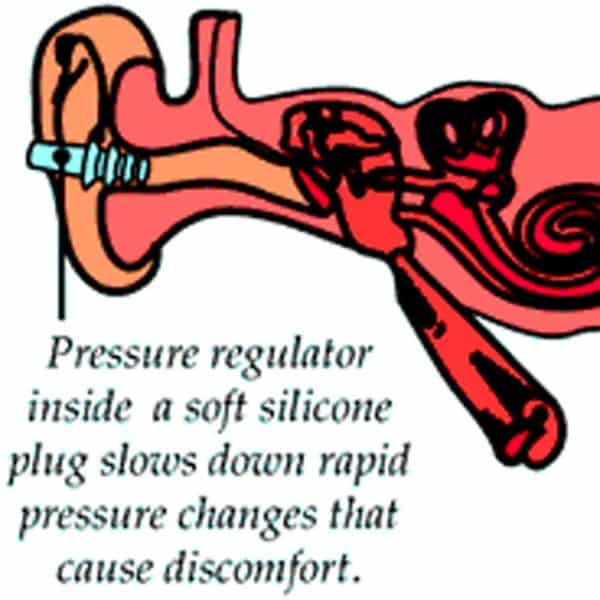 EarPlanes will transform any flying experience from stressful and uncomfortable to one that you breeze through effortlessly. EarPlanes offer you a drug-free, safe and hypoallergenic way to reduce air pressure discomfort and up to 20 Decibels of harsh noise while traveling via plane.

Each EarPlane consists of a soft silicone earplug with four rings that provide an airtight seal and a ceramic pressure regulator that is a controlled porosity filter. With one end facing the airtight seal and the other facing the cabin, a pressure differential is created. This ensures that the air pressure difference between the exterior of your ear and its middle is less severe, which in turn keeps your Eustachian tubes from swelling and causing you the discomfort you feel during take-off and landing.

EarPlanes are a patented pressure-regulating earplug inserted in the ear to help reduce discomfort often associated with air travel. They were developed by Cirrus Healthcare Products LLC in conjunction with the House Ear Institute in Los Angeles, and have been tested by US Navy aviators at the Miramar Naval Air Station in San Diego.

EarPlanes consist of two elements: a hypoallergenic silicone earplug and a ceramic pressure regulator. The silicone earplug has four circumferential rings which provide an airtight seal between the product and ear canal. The ceramic element is a controlled porosity filter, one end of which is exposed to the external cabin pressure, with the opposite end exposed to the sealed chamber formed when the ear plug is inserted in the ear. Thus, as the cabin air pressure changes, a pressure differential is created across the ceramic filter, thereby causing air to flow through the filter. The filter acts as an impedance to the flow of air into and out of the ear canal.

Discomfort is caused by blockage and/or swelling of a passenger’s Eustachian tube(s). The air pressure changes induced by the aircraft’s descent are too rapid for the blocked Eustachian tubes to adjust properly. However, EarPlanes, provide an equal but opposite impedance on the exterior of the middle ear, allowing relief. Discomfort is reduced because the air pressure difference on the exterior and interior of the middle ear is lessened allowing the Eustachian tubes to function more normally.

EarPlanes are intended for people with sensitive ears or people who must fly even though suffering from a cold, allergy or sinus condition.

A paediatric version is available for children 1 to 11 years of age. We do not recommend the use of EarPlanes in the event of severe sinus congestion (completely blocked Eustachian tubes).

Are there any other benefits to EarPlanes?

EarPlanes also act as noise suppression earplugs. Many users report that EarPlanes seem to filter out much of the objectionable high-frequency noise generated by aircraft engines. Most importantly though, airline flight safety announcements may still be heard (and headsets worn) by users.

During operation, air flows through the microscopic pores of the ceramic filter. Particles of smoke, pollen and airborne bacteria are small enough to eventually “clog” the filter and reduce effectiveness.

There are no reviews yet.

This site uses Akismet to reduce spam. Learn how your comment data is processed.